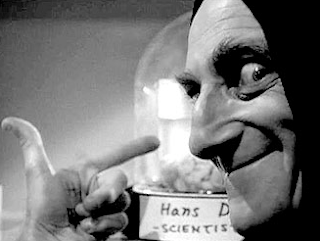 I have a personal and intimate relationship with my gallbladder.
I kept it in a jar to take it out and look at it all the time!
When I would shake it to move it around,
little jaged sandy rocks would scrape the bottom of the jar!
I lost it when I moved... and oh - how it miss it!
So I lost my gall bladder - twice!

I was never over 145 pounds all through my 30's.
Mostly, I was way under - with "Oprah-like" periods of
"getting it together" for a while...even for years!
And I, like many, had gone on a low-fat diet
to lose some weight. I did so well, I got to have surgery!
What a prize. 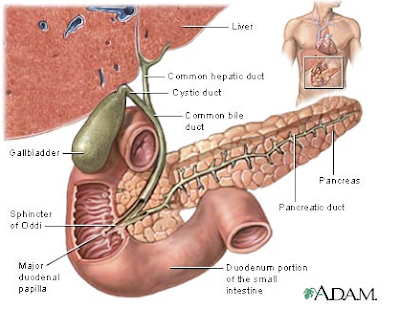 The gallbladder is a cute little thing that hangs off the Liver.
The liver is called The Liver - because it lets us live. (link)
The gallbladder helps by holding extra bile that was made by the liver.
It's a bladder of - and for - gall.
Upper right - to middle part of the abdomen.
And when the time is right, the gallbladder releases bile.
Like when the diet has high fat content.


When a diet suddenly goes "low fat," the excess bile
doesn't have a target. So the little gallbladder
can quickly form particles... from not being used.
It is said that with each squeeze of the gallbladder,
the little stones can compress and twist around, and get larger -
Like the snow-ball effect!
Then, they are too large to pass through.
It can cause pain and infection.
Gallstones are made mostly of cholesterol.
Hence the name "chole - lithiasis."
They can also be made from bile salts and pigments.
Or any mixture thereof.


My particular problem was that when the stones
traveled down (they do that)
they would get stuck in the common bile duct.
It's not called  "common" as in "regular."
It is shared with the liver - common to both - and meets the pancreas.
And when I got gallstones, mine would block the pancreas, too.
I felt like Chuck Norris had kicked me in the LEFT side -
the pancreas side. I was one sick puppy.
The surgeon said that in short-waisted people,
the common bile duct can be more like a "Y" shape.
Where taller people it can be more like a "V" shape.
And less chance for blockage.  I'm short-waisted.... more blockage.


Also, the bile and pancreatic enzymes can irritate the
duodenum...like a Duodenal Ulcer... but that's
another story for another day. I once believed the fontleroy about gallbladders
and bile and the importance about going on a low fat diet.
Now, I wish I had found Atkins years ago.
But of course, that's just me!


In Nursing School, they said that gallbladder problems
were also called "The 5 F's".... as in
Fat, Fair, Forty, Farting Female.
We've learned alot since then! 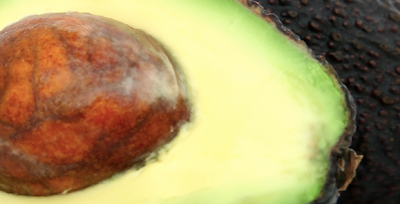 I sat in awe  - the first time I snuck off and had an avocado -
YEARS after gb surgery. I was prepared to get sick...
But just the opposite thing occurred.
I felt great! Actually, never better!

And even though my diet is now pretty high fat and pretty low carb,
I never feel sick over the high fat content, or bad.
In fact, I feel great!
But that's just me...I have to say that, ya know.
It's funny now, that when I do feel sick from any other cause,
everyone of my nurse friends is quick to blame Atkins.
If anything, they should blame ME -
for the times I don't follow it to a "T!"
Like from the book "Atkins Age Defying Diet Revolution" (link)

A question was asked - "Do I think that Atkins
Is harder without a gallbladder?"
Well, maybe - but I think it's still hard in general.
And maybe, being post-menopause doesn't help.
Atkins asks us to make some hard choices.
Like giving up sweeties. And endless junk foods.
Which, by the time we are 50, prolly shouldn't be an issue...
But I know it is.
At the end of the day, Atkins (and now Paleo/Primal)
is all about eating healthy food. Stuff that is good for us.
Real food! What a concept.

I know I lost about a pound a week, average.
After Induction, that is, when it came off in droves.
And I'm ok with that.
I also know there are times I don't lose at all.
But I think that is true with ANY weight loss program.
It is a lie to think we can have it all in 90 days...
(For just the low price of $29.95  - whatever!)
It takes years! And there are no shortcuts.

Atkins wrote this when asked about why it seems
harder to lose weight at age 50 than at age 30.
"Send all complaints to Father Time.
Post Box: Eternity!" 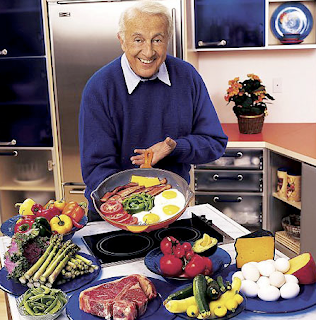 Gotta love that guy!
He also wrote this:
"Remember my suggestion to continually visualize yourself at your goal weight.
Think about how much you deserve to look and feel good,
to enjoy the happiness, health and sense of well-being that will come with weight loss. Eating healthily is something you're doing for you--a gift to yourself, not a punishment. Value yourself and you'll be able to enjoy and succeed at this endeavor."
Dr. Robert C. Atkins