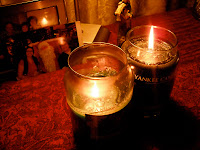 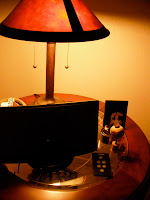 Sweating peppers is not an easy task.
I suggest you light some candles, put on some music,
Maybe have a glass of wine - if you are so inclined.
(None for me!) 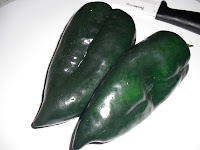 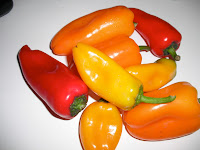 These are Poblano Peppers..... and some other kind of pepper.
The Poblano Peppers are bigger, kinda mild...
I don't care for green bell peppers, but I do like these.
But if you are going to stuff them, they have this waxy skin...
That's what has got to come off!
The other kind - not so much.
Some people call it sweating.
It's called "sweating"  because... well, you'll see why later. 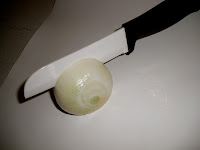 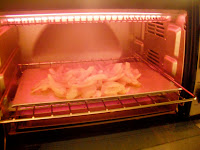 Here's the steps on sweating poblano peppers:
1. Find your oven.
2. Figure out how to turn it on.
3. Maybe roast some veggies in there
while we wait. 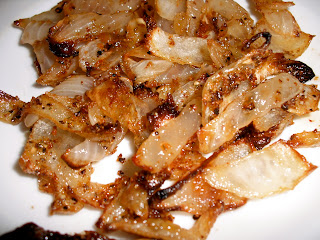 That looks good -
Now - on to the peppers! 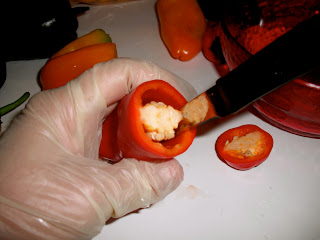 Wear gloves when you handle peppers!
Gloves work for onions, too. 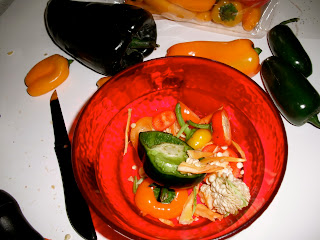 A little Rachel Ray "scraps bowl" is a welcome addition. Another Mastication Masterpiece from the kitchen!
Grilled - roasted peppers. With Balsamic Vinegar
and butter and bacon drippings. Celtic Sea Salt. 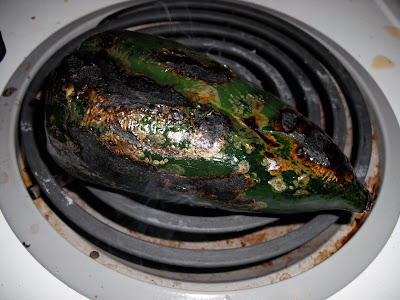 On to the sweating.
The best way is to put the pepper right on an open flame.
I don't have a gas stove. Just electric.
With an ever-messy burner plate. 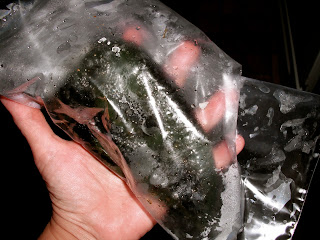 Now - as soon as that pepper (aka bad boy) is charred...
Put it into a bag. That's right. A plastic bag. And seal it up.
And please don't go telling me about the toxins
in plastic and all that. I already know. Alot of people who do this
do not use this kind of a bag. Anything water proof will do.

See the condensation? There's the sweat!
It's not "sweating" like a chef would "sweat" something.
All the moisture dripping causes
the skin to just peel off.
Here's a link to the process. 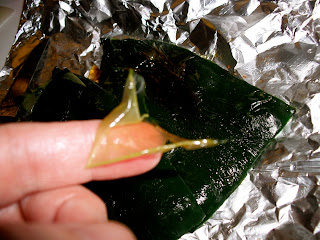 Here's the waxy skin that has to come off.
It just scrapes peels comes  right off after you singe it all.
In a fire. Or something very very hot!

If your eyes aren't burning,
And if the kitchen isn't filled with smoke,
And if you don't set off the smoke alarm,
And if your house doesn't smell like melted candles,
You probably aren't doing something right!

The peppers are now ready to stuff with cheese!
Maybe cut the top off and take out the seeds.
Maybe stuff with some ground beef..
Melty Cheese. Chopped onions. Garlic.
Maybe wrap it up with bacon. And bake them!

Maybe dip them in first eggs, then coconut or
almond flour for a little coating. Maybe ground flax seeds.
Then fry them in a pan with a good amount of oil.
Please - if you try this -
let me know how you liked it!
by Anne H @ 07:10